An Interview with Author Renee Riva 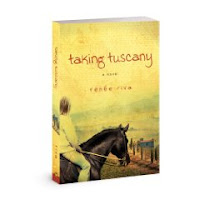 Renee Riva has been writing humorous stories about animals ever since she was a child. A former greeting card writer as well as a speaker for women's groups, Renee has also written for family magazines. Her books include Izzy the Lizzy, and Guido's Gondola, both picture books. Her first novel, Saving Sailor, released in May 2007. The sequel, Taking Tuscany, releases in May 2009. Renee also offers school visits and presentations.

When did you first consider yourself an author?
I won a creative writing contest in second grade and that pretty much started the whole thing, but it took another thirty years to actually get my first book published. It was when Guido's Gondola arrived on my doorstep and I saw my name on that book. That's when I knew I was a real author.

What inspired you to write Saving Sailor?
I had such great childhood memories from growing up in a big family and spending our summers on an island. One memory in particular often came to mind. I would go out in my little rowboat with my dog and just drift around in the sun, no hurry to go anywhere. I had a photo of the two of us in the rowboat--I was rowing and my dog was wearing a life jacket. That photo triggered the story Saving Sailor.

What made you decide to move from children's picture books to YA Fiction?
After writing Izzy the Lizzy and Guido's Gondola, I wanted to read a good humorous, but clean novel. I couldn't find one--so I wrote my own.

Is it true that Taking Tuscany is the second book in a trilogy? When will the next book come out?
Yep. After A.J.'s family moves to Italy, A.J. has a hard time adjusting and fitting in to a new culture--especially at age 14. Things get pretty crazy in Tuscany for her! It's a very fun adventure, which is coming out May 1 2009. But all of my readers were dying to know what happens between A.J. and her childhood friend, Danny, who she left behind on Indian Island, along with her dog, Sailor. So book three, "Heading Home" will be their island reunion when A.J. is 18, and Danny is 21. It's coming out April 2010.

Can you tell us two of your favorite YA books?
Saving Sailor & Taking Tuscany :O)
Okay, besides those:
The Secret Life of Bees
The Good Nearby
& Flipped
(I know that's 3--but they tied).

What book are you reading now?
The Martyr's Song by Tedd Dekker
It's about a high school girl who learns what it really means to be beautiful.

Do you have any advice for young writers?
If it's in your blood to write, then WRITE! Write for the love of writing, but if you want to get published, join writing contests, go to writing conferences, develop your craft, and don't give up. It's the writers who are still in the game after everyone else gives up who end up being authors. You have to be persistent, write what's in your heart, and have faith that your words will someday be read by someone beside yourself.

I wish you all my best!
Renee

Thanks again to Renee Riva for appearing, courtesy of Provato Marketing, for other stops on the tour please check Provato Events.

Posted by LitPick/Flamingnet Teen Book Reviews Blog at 7:00 AM

See how you can review for us!

Apply to become a student reviewer

Get our monthly newsletter and stay updated on our reviews